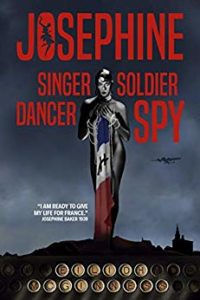 Although Josephine is a true life story but it was written in a captivating fictional way. Set in America, during the beginning of the twentieth century, a dark era when racism and oppression against blacks and people of color was at its peak. Josephine, just like most other blacks during the time, was born in abject poverty, and being the eldest child meant she had to start contributing to the family’s upkeep even at a tender age.

Josephine was able to travel to France on an invitation to perform in Paris, and was shocked to discover that there were equal rights and justice for all regardless of one’s color and blacks moved freely and has dignity unlike like her hometown where they were discriminated against. Unfortunately for Josephine, fate had other things in stock for her as war broke out not long after her arrival in France. A war between Nazi Germany that wanted to institute the sort of discrimination she had escaped from in America, against France and Britain that wanted to uphold freedom and equality.

Josephine is not a book to be read by the faint-hearted as it is highly emotional and heartbreaking as it captured all the sufferings people of color were made to pass through. It covered her life and times as a great dancer, singer, spy and above all her rise from grass to grace.

BIO: Eilidh Mcginness was born and brought up in the highland of Scotland. After studying law at Aberdeen University she became a lawyer and practiced law for twelve years, latterly specializing in criminal defense. She then moved to South west France where she established an independent estate agency business selling dream property. Now. following her own long held dream she began writing. In keeping with her own passion for history, Eilidh writes historical fiction.