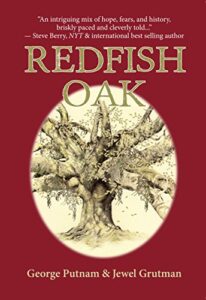 Right from the first page, reading Redfish Oak gives the same thrills as would a Hollywood blockbuster movie. The story began as seventy one Red Indian prisoners were being transported to Florida.

Although Nan Carew was a White teacher from a privileged background, she took it upon herself to educate Black children in her community, at a time racism was still rife in the South. Mr. Carter Green was a photographer with a passion to bring about positive changes through his pictures. Lije Taylor grew up in Little Africa, a Black community where people of his race were often oppressed. Boy Hunting was among some Red Indians who were taken into captivity for crimes committed by his tribesmen.

The book has a well-developed plot that was complimented with equally strong characters from diverse backgrounds.

Redfish Oak is an educative book, and captured most of the activities that were prevalent in the United States during the 19th century, especially about the treatment of Negroes and Red Indians as well as how some Southerners related with others during a turbulent era in US history. It was a period when horse-drawn carriages and locomotive trains where the popular means of land transportation in post-civil war America.

This is a great book no one should miss!