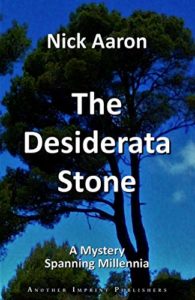 Daisy was born blind but later chose a rather odd vocation in becoming a sculptress. Her love for works of art made her to visit Rome where she met a group of much younger tourists, some of them deaf and others blind, who equally visited Rome for more or less the same reason. Their host was Father Cadogan in company of Sister Liz, the sign interpreter. Father Cadogan was keen on using the opportunity to understand why there seemed to be mutual distrust between blind people and deaf people.

Initially unnerved by the age difference between them, Daisy would later strike a friendship with Morag, a deaf college student who was partnered with her.

The story was narrated in two parts sort of, and the other was about events that occurred in Rome around AD 64, and was about the life and times of Sextus Pomponius Sacer. A poor Roman citizen who nonetheless considered himself privileged for owning a slave, despite the slave girl being deaf and dumb. Although he lived in a little and poorly ventilated house with his wife Claudia and blind daughter, Desiderata, Sextus was proud to be a Roman citizen.

The story was largely told through the eyes of Daisy, and at the age of 61, she was wrongly accused of murder; an incident that supposedly happened about four decades earlier. Daisy was left with no other option than to prove her innocence regardless of how much water has passed under the bridge and worse still, being blind.

The Desiderata Stone is quite interesting with lots historical information about events that occurred during the time of the Roman Empire and the WW11.

BIO: Nick Aaron is Dutch, but he was born in South Africa, where he attended a British-style boarding school, in Pietersburg, Transvaal. Later he lived in Lausanne (Switzerland), in Rotterdam, Luxembourg and Louvain. Currently he works for the European Parliament in Brussels, proofreading legislative texts in all 24 official languages.