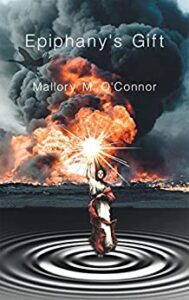 Epiphany’s Gift is a paranormal book that centered on Epiphany Mayall, a psychic that had supernatural powers to see beyond the ordinary, and foretell events before they occur.  Epiphany was born with this special gift, but to the chagrin of her father who would have none of it and a husband who made fun of it. However, after years of trying to deny the supernatural gift she possessed without success, Epiphany ultimately gave up, and returned to work as a psychic.

When the Blake was stolen from an art museum, under the care of John Bernhardt, he decided to reach out to Epiphany while hoping that she could help unravel the mystery surrounding the stolen artwork. Although, using her gift to conduct investigation was an uncharted territory for Epiphany but when the news of John’s death broke shortly after, everything took a new twist.

Epiphany’s Gift is a suspenseful thriller that will set any reader’s heartbeat racing, as one ominous scene tumbles into another. The author did a great job of narrating events in a gripping way, thus making it seem so real.

This is a book anyone would be glad to read!