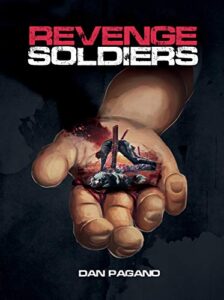 As the God King, Johannas has never been afraid of anyone dead or living, yet even as he was in control of the Citadel, he still craved for even more powers. However, in his desperation to quell dissent voices, Johannas threw caution to the wind as he took extreme measures against his perceived enemies. The mass executions or culling that followed only succeeded in forcing his opponents to close ranks as they rallied to stop him. The coalition forces included the Patriarchs, the Reapers, the Muses, the Elders, the People’s Army and of course the Revenge Soldiers who were on a vendetta mission. It was no doubt a massive rebellion of unprecedented proportions but Johannas was determined to crush it by all means necessary.

It was the mother of all battles, but as the fight for supremacy raged endlessly, Johannes could only hope on the support of Captain Talghese and his brother Mordecai to tip the balance.

Other characters in the book include Muse, Jakob Isaacson, Kwan Chin, and Commander Seji among others.

BIO: I have written seven books beginning to end and have begun a number of other works. I am a graduate of Ashland University with a BA in Psychology and a lifelong love for reading and stories. I have many wondrous tales to tell which I cannot wait to share with the whole world!
My latest book is Revenge Soldiers, a story about a group of orphans who grew up in total isolation. Most of them have rather unique gifts and their training was intense, and their experiences psychologically scarring. The Revenge Soldiers go off to war at a young age, called upon to save the Earth from brutal monsters called Destroyers. In the wake of this war one of them, Johannas, begins to acquire power and influence. Eventually he seizes power over the entire world and institutes a brutal regime, perpetrating atrocities which force his fellow soldiers to band together against him. The action is fast paced as the grown children struggle to grapple with their shared past as they try to bring down their rogue brother- the man who would be God!
The challenges of writing every book are unique to be sure. This particular work delved more deeply into my own psyche and inadequacies than any other work I have begun. It proved to be quite challenging to bring out the history of the main characters, then tying it into the present day storyline.
As a writer I try to keep things fresh in the respect that I am constantly exploring new stories, characters and introducing my potential readers to new worlds! Each story is unique in its character, voice and perspective as well as the different ideas each fantastic tale introduces!
Thus far I have self published my works through Author House and I Universe, leaving the weight of marketing and promotion on me. I have entertained and begun a project to write a screenplay and I also have plans to convert one of my books into an online comic. The sky’s the limit so to speak!
I have always loved writing, reading and stories, particularly works of imaginative fiction. Quite simply put: I have many, many stories to tell and an intense desire to share them with people. Eventually I plan to present my stories via mass media: movies, series and even graphic novels.
I have seven completed books and one short story. They are: The Dark Exiles, The Black Order- vol 1 and 2, The Coming of Darken, The Other Side, Revenge Soldiers, Black Holes and Messiahs and a short story called Paradise.
I would think it would prove quite difficult for anyone to write without feeling emotion quite deeply. My characters are a part of me, expressing my inner conflicts, insecurities and even sharing some of my darkest moments. For me as a writer it is necessary to speak from the heart. That will never steer me or my reader wrong.
A career in writing is my dream, and while I am certain it will present new challenges for me I am greatly looking forward to meeting other writers and to building a network of loyal and avid readers.
If I would advise anything to a new writers it is this: write what you love, write from the heart, hold nothing back.