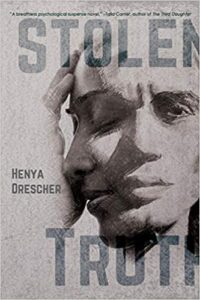 Bree woke up from a nightmare only to realize that her worst nightmare was already playing out in reality. Her beloved baby was nowhere to be found likewise her husband and the midwife, all disappeared into thin air with no trace left behind. It was the second tragedy to occur in her life. The first, watching her parents burn to death in an accident years back had left her traumatized with a history of psychological problems. Now, aside her leaky breasts and soft belly, it would prove a herculean task to convince investigators to search for her missing baby without becoming a prime suspect or being seen as a nutcase. However, against all odds, Bree was determined to find the con artist who stole her baby.

Stolen Truth is a suspenseful novel that will keep the reader’s heart racing from the first sentence, and the tempo sustained at varying degrees all through the book. The characters are strong yet fallible like real people and are complimented with a captivating plot.

It would be hard to read Stolen Truth without being emotionally attached and sober—a great book that would certainly make anyone’s day!