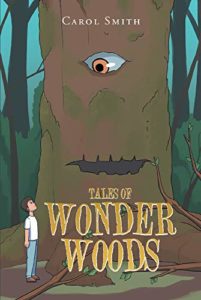 Tales of Wonder Woods is a classic children’s fantasy book. The story revolves around a nice nature-loving boy named Val, who lived with his mother at the outskirts of Grass Valley, California. Val took it upon himself to save Croaker; a bullfrog that had an accident. He also took care of his puppy he named Thor. His mother had brought the puppy for Val after he returned Croaker to the wild, so he wouldn’t feel lonely. During one of his visits to Croaker, he met Spruce; a tree that could walk and talk and they became good friends. Spruce informed Val that the woods were under threat as Lumberjacks were threatening to cut down the trees. However, Val was determined to save Spruce and the other trees, so he asked his mother to help him in stopping the Lumberjacks.

Val’s adventures are quite exciting as he interacted with the animals in the wild and also helped them to overcome some of man’s cruel attitude towards them.

Tales of Wonder Woods is quite thrilling and refreshing to read; above all, children would enjoy it as it captures the sort of fantasies that makes their world go round. Also, the book has a lot of lessons on how to be humane and protective towards nature.

The book is highly recommendable for children and all lovers of nature.

BIO: My name is Carol Smith.  I am a grandmother of eight grandchildren.  They are all a great joy in my life.  My recent book “Tales of Wonder Woods” began as a story I told to my grandson Val when he was in my care.  I am currently writing a children’s historical fiction.  I have written poetry but have not published so far.

I am an outdoor person loving hiking in the nearby Sierra Nevada mountains.  I enjoy kayaking, swimming and biking on a nearby river trail.

I love adventure.  In 1989 I back packed into Haleakala, a dormant volcano on the island of Maui.  After a 10,000 foot descent to the bottom, our group met with the tail-end of a hurricane.  I have hiked to the bottom of the Grand Canyon, camped for ten days in the Alaskan wilderness and so much more.  My life is blessed.