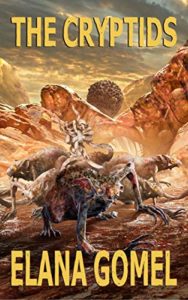 Dr. Sharon was out of job, save for a pet babysitting pass-time work at Frank’s countryside private mini zoo. Sharon was a Cryptozoologist by profession who had broken up with her ex husband Mark.

Just like how most horror stories start, an alarm raised by Lester Choy that his wife was suddenly carried away in his presence by some sort of giant thunderbird was dismissed by all as a drunken statement, while insinuations were rife that his wife’s missing could be because he actually murdered her. Sharon had approached Lester for an interview just to satisfy her own curiosity.  No one believed the story about cryptids being in existence. However, it was not until a chain of strange and horrifying events started happening in quick succession that people realized that some creatures beyond the ordinary were now threatening human existence. In the midst of the chaos, Lester had to prove that a phantom cryptid had swallowed as against him murdering his wife.

Mark was a college professor who did only believe in evolution as the process that brought about current life forms but was also a staunch atheist. However, it was not until a strange creature emerged from his basement and smashed through windows to devour Jim and his wife Maria who were with him that he knew that something terrible was going on.

One could feel the tension rising as the book progressed and the author did a great job in coming up with a rich plot that takes one through a labyrinth of horror, adventure, confusion and anxiety.

The Cryptids is divided into three parts while the story was told largely through the perspectives of Sharon and Mark.

It is no doubt a masterpiece that could keep any reader spellbound till the very last word!

BIO: Elana Gomel is a professor of English literature who has taught and researched in universities around the globe, including Tel-Aviv University, Venice International University, and Stanford. She is the author of six non-fiction books and numerous articles on subjects such as science fiction and narrative theory. As a fiction writer, she has published three novels and more than fifty fantasy and science fiction stories in Apex, Fantasist, Zion’s Fiction, People of the Book, Apex Book of World Science Fiction and many other magazines and anthologies. Her latest novel is The Cryptids (2019).  She can be found at www.citiesoflightanddarkness.com/.