Home > The Dawning of Peace 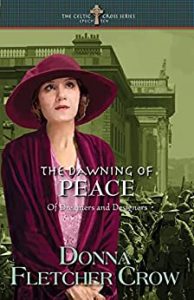 The Irish people felt cheated and oppressed by their English neighbors who imposed partial authority over them. The deep seethed animosity between both sides was gradually rising and Mary found herself torn between nationalism and unionism.

For eighty years and encompassing the First World War and other upheavals, nothing much has changed despite many dead and Britain emerging victorious over the Germans. Mary had escaped death by the whiskers and was still nursing her injuries but Gareth was left in a more precarious state. Gareth meant the world to Mary but has remained in coma ever since a bomb blast incident. Would he survive it? How long would they have to endure the suffering? Could there be a solution? Only time will tell.

Characters in the book include Gareth, Mary, Philip, Debbie, Liam, David, and Sheila among others.

The Dawning of Peace is an interesting and eye-opening story that captured the political crises that affected Ireland, Northern Ireland and England for several decades. It was narrated in two parts; between an earlier period and a more contemporary time.

BIO: Donna Fletcher Crow has written more than 50 novels drawing on her love for and study of the history and literature of the British Isles. Both of her previous epics, Glastonbury, the Novel of Christian England, and The Fields of Bannockburn (from which The Celtic Cross Series, Part I, was taken) were given top historical fiction awards by the National Federation of Press Women.
In writing The Banks of the Boyne (which furnished the basis for the Celtic Cross Series, Part II) she turned to the heritage of her husband’s Irish family whose sixth great-grandfather was converted under the preaching of John Wesley in Ireland in 1787—a legacy that still burns bright more than 200 years later.
Donna also authors three mystery series: The Monastery Murders, clerical mysteries; Lord Danvers Investigates, Victorian true-crime Mysteries; and The Elizabeth and Richard literary suspense series. Donna and her husband of 57 years live in Boise, Idaho. They have 4 adult children and 15 grandchildren. She is an enthusiastic gardener.