Home > The Everlasting Spring: Beyond Olympus: Colton and Blue Star 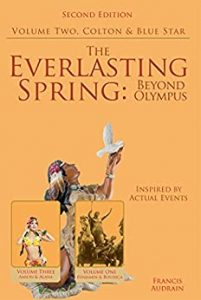 The Roman legions and their accompanying brutality may have receded but cultural and religious clashes were now rampant especially between the Irish and English. Determined the escape the turmoil and misery in Ireland, Fiona and her parents embarked on a perilous yet uncertain journey across the oceans to the new found land called America.

Characters in the book are Aaron, Jim, Sister Dennis, Blue Star, Stewart, Peel, Larkin, Margeret, Charles, and Virginia among others.

Colt was born of immigrant parents that suffered a lot of indignities but despite being young he could observe the harsh treatments they faced. Once he came of age, he began a journey of discovery across the United States, aimed at changing their fortunes for good. Would he be able to survive the perils along the way?

This book is sequel to a previous edition that shares same name with it. At 570-page long, it is quite voluminous but that notwithstanding, it is entertaining to read and also reveals a lot about the history, politics, people and religion of both Britain and the United States—a must read!