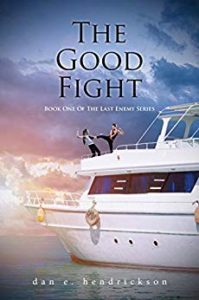 Jacob was caught between two worlds that mean so much to him—a family that needs him to be close to them and a career he is fascinated about and was already on his way up the ladder. A promotion was already in the offing but going to be with his family will mean not only losing out on the promotion but having to retire completely from the US navy. The options before him were difficult; either to return home and be with Mary and Daniele (his wife and daughter respectively) or remain in the navy and serve his country. It was a tough choice, but one he would have to make considering that his career as a naval personal was fraught with risks and he had a close nit family that included his parents. However, tragedy struck when it was least expected, and a plane crash tore the family apart leaving Daniele bereaved. However, it would be later revealed that Jacob and Mary were not dead after all.

The Good Fight has a good plot and fairly developed characters, however, the story largely revolved around Jacob and his daughter Daniele as well as international politics and the activities of US Coast Guards.

The Good Fight is indeed an interesting story that could keep anyone fully engaged.