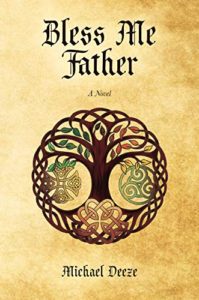 Not a few books have been written about American soldiers and their involvement in the Vietnam War, however, Bless Me Father has a unique feel about it. One could feel the tension and suspense right from the first page as a group of battle weary US marines trudged through muddy waters, high humidity and thick jungles, trying to make it to their forward operating base.  The environment was as treacherous as it was dangerous with landmines and Vietcong guerillas lurking in every corner of the rainforest of Central Vietnam. Among the terrified soldiers hoping to make it to FOB alive were the FNG’s an acronym for fucking new guys.

The plot oscillates between happenings that were taking place at the moment and throw backs from the past. The author did a good job in making the book interesting through his descriptive way of passing information across to the reader. It makes the reader to easily identify with the characters as well as events as they occur in the book.

At 487-page strong, Bless Me Father is relatively voluminous but the good side of it is that there were hardly any fluff or boring lines. However, the back and forth pattern of the plot may appear a little distractive to some readers as you have to switch from past to present and vice versa.

On the whole, it is no doubt a thrilling book.