Home > Opium and the Red Rose 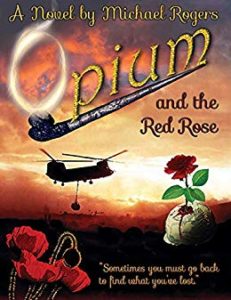 Opium and the Red Rose is a fictional adaption of events that actually happened in the past. Some of the world’s greatest wars have all been documented in books in diverse accounts, detailing what really took place. However, what made Opium and the Red Rose intriguingly different is the fact that it was written by a veteran who is not only unbiased but wanted the story to be told in an uncensored way, and exactly the way it all took place.

The protagonist, Danny, had seen action though not as a soldier but as a photographer in the Vietnam War, during the late 1960’s until a doctor’s report forced him to quit the war and return to the United States.

Danny was on a military posting along with his wife Lilly who was a dancer in a club. A career many of his colleagues felt was demeaning for an officer’s wife. Danny couldn’t object much when Lilly insisted on going ahead with her dancing. However, coming home one faithful day only to find a note from Lilly saying she has left with a band to New Jersey came as a rude shock to Danny. Not long after Lilly left him, an opening came for Danny to be sent to Vietnam during the thick of battle. He felt he had nothing to lose and accepted the posting.

More than a decade later, Danny was called into the office of Senator Mainland and was assigned to go on a covert mission to Thailand with the agenda to help eliminate up to forty percent of heroin supplies from reaching the market. The idea was for Danny to leverage his personal relationship with Khun Sa, his former driver during his coverage of the Vietnam War. Khun Sa was now in control of heroin supplies in the Far East to cut off the supply chain.

Danny wasn’t sure if Senator Mainland was to be trusted since he was a typical politician, but the offer came with a good pay and the American state would owe him a world of gratitude if he could pull it off.

Senator Mainland detailed one of his staff, Susan, to accompany him on the mission but unknown to Danny; she was the Senator’s niece.

Opium and the Red Rose contain lots of flashbacks to bring the reader to terms with events that occurred earlier.

To accomplish his mission, Danny would require all the determination he could muster and of course mother luck if he were to overcome the dangers that lay in wait for him, beyond the vast terraces of rice fields in Thailand.

At 639 pages, Opium and the Red Rose is relatively voluminous but no doubt engaging all through till the very end.

BIO: Michael Rogers was born on June 19th, 1940. His father joined the Navy in 1941, and his mother moved to Brooklyn New York to be near the Navy Yard. He spent his early years living with his grandmother in Minneapolis but was reunited with his parents after the war. His family moved to Florida when he was 9. In 1958, he graduated from Coral Gables High School before attending the University of Miami, where he was introduced to the entertainment industry and fell in love with it. In 1963, he joined the Air Force and was able to complete his education at USC through the Airman Education and Commissioning Program. He received his degree in cinema and was inspired by the works of Riefenstahl to become a documentary filmmaker who would chronicle the Vietnam War. It was the first time servicemen went into combat zones as part of a film crew. The main character of the story and the events portrayed, while fictional, are inspired by his life experiences.