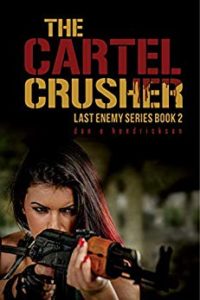 One could easily feel the vibe of the book as a pulsating thriller, right from the very first page.  Marnia, the beautiful daughter of Tomar Gonzalez, President of Mexico was on a cruise ship as part of her birthday celebrations when pirates struck. Boriz had his plans ironed out and with the help of the Jamaican “monster” named Dominik, was able to seize the cruise ship. However, what he didn’t envisage was that the US Coast Guards would intervene. The Coast Guards were led by the commander, Jacob Edwards who succeeded in making history with his heroic rescue efforts.

The violence, suspense, and action as well as a combination of well-developed characters and flawless plot all combined to project The Cartel Crusher as a classic thriller. Reading through the book can be likened to watching a fast-paced movie.

Following the nightmare in the cruise ship, Marnia was forced to join the military which would ultimately put her in the forefront in fighting such criminal syndicates.

The Cartel Crusher has absolutely no dull moment as every paragraph appears to have something of interest to keep the reader flipping through the pages.