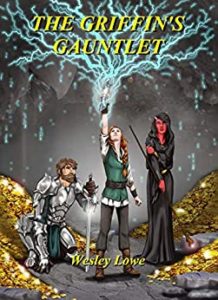 Sixteen year old Sharon was living with her father and brother, and thought life couldn’t be more boring. However, that was until she met Gerald deep in the woods. Sharon couldn’t tell if it was his calm demeanor or the enchanting way he played a flute that endeared him to her. Regardless of his gentle nature, there was an air of mystery surrounding him and Sharon’s attempts to know more about him were fruitless. All was well until Gerald asked her to meet him by the oak tree at midnight. Alan Amber, Sharon’s father had a hunch that something was amiss with her and warned her to be wary.

Sharon did not heed her father’s warning and her life would never remain the same again as she was teleported to a strange land where weird things began to occur. It was only then that Sharon realized she has a big role to play if the Dragon King must be defeated.

The Griffin’s Gauntlet is a magical realism that is quite captivating to read. The author also made use of Old English in some places as well as queer words and phrases to make the story more in dept.