Home > Where Have All the Elves Gone? 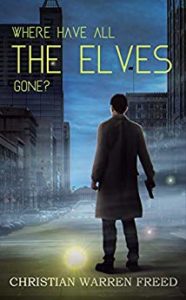 Daniel Thomas was a successful author who had enjoyed life under the limelight but was currently on a career slippery-slope down the hill. The story gathered momentum as Daniel faced his fears and an uncertain future. He has no option than to confront his agent, Ariel for rejecting his latest book and then try to convince her into having a rethink.

The author’s flowery way of writing is a reader’s delight, and made the book to flow with a natural course that one can easily identify with. The combination of a complex plot and fairly developed characters gave the book the appeal of a real-life narration rather than a work of fiction. However, the book took a surreal turn when Daniel got to Ariel’s office and found her in a pool of her own blood. He discovered that the killers weren’t humans but some sort of aliens who equally made veiled comments about what was to come.

There is an abrupt twist in the plot as it became obvious that the book is actually a science fiction. Daniel was still having thoughts about his wife and kids at home while he was being driven into a dark labyrinth where strange aliens held sway. To make matters worse, Ariel belonged to this alien race and she had told him about a Princess he knows nothing about, moments before she died.

Daniel was taken hostage by Alvin, king of the High Elves who was determined to get his daughter back.

Cassandra rued the death of her lover Xander, Ariel’s brother who they all wrongly believed was killed during a fight following Ariel’s death.

Daniel found himself on a forced mission he neither understood nor wanted to be part of. With Sara, his beautiful wife kidnapped as well and brought to the alien world. He knew he had to comply with the assignment he has been entrusted with, if they were to stand any chance of returning alive.

The book no doubt has a complicated plot, but is indeed very interesting and can engage the reader till the very end.