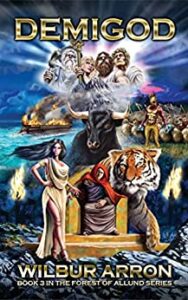 Demigod is part of a thrilling fantasy series that was set in Greece following the death of Alexander the Great. The story revolves around Alexio Sopholus, a noble mage with supernatural powers. Just like other mages, he would fight to save humanity and help to restore law and order.

The forces led by Zilar were still determined to either rule the world unilaterally or totally destroy those that try to stand in its way. Regardless of his magik powers, Alex knew it would be very difficult to defend against the hordes sent by Zilar but he was determined to put up a good fight while equally watching over little Diana. However, with support from other mages and his animal friends, he hoped to beat the odds not minding he was holed up in the wild under harsh weather conditions.

Demigod is a very interesting book to read and includes animal characters and unicorns that have the ability to communicate with humans, through the mages.

There are no fluffs in this book as each page turns into yet another in an endless flow of enjoyable adventure. It is indeed an engaging masterpiece that will no doubt keep its reader engrossed till the very end.

BIO: Wilbur Arron is the pseudonym for a retired professional engineer who spent over thirty years in engineering and over forty years in technical management. An avid reader of fantasy and science fiction since a child, he always wanted to take up writing. His interests also include ancient history, especially in the Greco-Roman period. He has previously published a series of short stories on many web-based sites of fiction and fan fiction. One of his short stories has just made it into the Story Star anthology as one of the best short stories of the past year. This is his third novel.