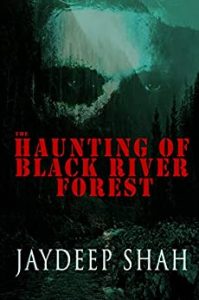 A couple went hiking in the Black River Forest but it became creepy when heavy rain began to fall, accompanied with thunderstorms and lightning. In trying to find their way out of the forest, they ran into a hungry bear that was about to devour a girl but fortunately they all managed to escape by the whiskers. However, things took a nasty turn when they encountered the savage Psychopath; a serial killer who they had assumed only existed in folklore. So, in essence, they were caught up in-between the devil and the deep blue sea. Worst still, having lost track of the red ribbons that guided people out of the forest, now means they were effectively lost.

The odds of ever escaping were quite negligible but they must keep faith alive while appreciating every second.

Characters in the book include Oliver, Mia, Jany, Lucas, Sheila, and Nancy etc.

The Haunting of Black River Forest is a horror book that would certainly make the reader’s hair to stand up at the back of their neck!

BIO: Jaydeep Shah is an avid traveler and the author of gripping horror, thriller, and romance stories. As a bachelor’s degree holder in Creative Writing, he aims to entertain as many as people he can with his stories. He is best known for Tribulation, the first book in the “Cops Planet” series.

In addition to those books, The Shape-Shifting Serpents’ Choice, Jaydeep’s first young adult flash fiction written under his pen name, JD Shah, is published online by Scarlet Leaf Review in their July 2019 issue. Currently, he’s endeavoring to write a debut young adult fantasy novel while working on a sequel to his first apocalyptic thriller, Havoc.

When Shah is not writing, he reads books, tries new restaurants, and goes on adventures.