Home > The Singer and Her Song 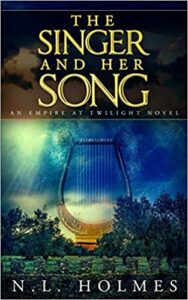 The story began as the Assyrians were determined to take over the besieged city of Kahat, while its embattled and dispirited inhabitants were frantically trying to put up a defense. Just like most other Mitannians, Uqnitum knew it was only a matter of time before they would be overrun by their enemy. The inevitable happened as Kahat was eventually destroyed and all its inhabitants taken into captivity, amidst blood chilling horrors.

Uqnitum was a courageous woman who stood in the gap for her family, which included her aged husband, a pregnant widowed daughter and aberrant teenage son. Although she knew that life was going to be tough for them as slaves in the hands of the Assyrians, but the violence, bloodletting, and gore that was unleashed on them was overwhelming. However, Uqnitum was determined to survive it against all odds.

The Singer and Her Song is a gripping story that has a great plot and well developed characters. The book is thrilling and would be a delight to watch if adapted into a movie.