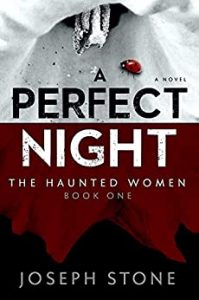 Fran was still a kid when her mother died in a ghastly car accident while trying to escape from her father, a textbook a**hole who made life miserable for them. The tragedy more or less made Fran an orphan of sorts since her father couldn’t in the least care if she existed.

With nowhere else to go, Fran was adopted by her aunt but unfortunately, that would mean having to live with her cousins in a small house that could barely contain them. As if that wasn’t bad enough, she would have to contend with erratic Carla who wouldn’t stop maltreating her—including physical and mental abuse.

Other characters in the book include Loretta, Laura, Drew, Alfred, Mary Jane, Michael, Valenti, and Aurora among others.

Lonely and dejected with no one to truly confide in, Fran thought that all hope of finding respite was lost until her late mom started coming to her rescue when it mattered most.

A Perfect Night is a thrilling but emotional dark fantasy novel that is touching. It is a book that is absolutely enjoyable to read.