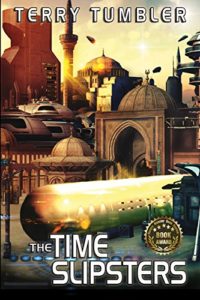 The plot of The Time Slipsters was set well ahead of the present time, and the author was able to put in place the sort of technological advancement and all other things that could possibly be obtainable in a world that has truly evolved.

The story revolves around Terry Tumbler, who has an erratic mind and Sandra, his wife. Terry was hoping to visit Turkey on a holiday so he could finally laid to rest, his odd feelings of having been there in an earlier life. He had to convince Sandra as well as some other friends to come along with him, after an earlier holiday they all embarked upon was nearly marred by his poor attitude.

During the period, aircrafts and airports have become obsolete in many places and its place was the more convenient and compact driverless potties that conveyed people to their destinations. However, another trendy way of flying was with the magic carpet which was yet to become popular in Turkey when the holiday makers arrived in it.

Aided by the flying magic carpet, the holiday to Turkey soon became a tour of discovery as Terry and the others were able to get a glimpse on historical events as well as encounters with aliens.

Reading The Time Slipsters would naturally get anyone flipping the pages till the very last.