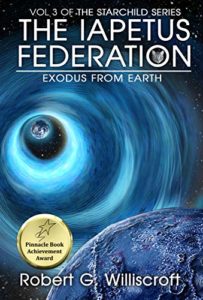 Third in a trilogy, The Iapetus Federation is a complex blend of projected speculation of what the world could become in the future as well as sprinkles of fantasy.

The book has a large cast of well developed characters which the author complimented with a fantastic plot that took advantage of the current deepening global economic, religious and sociopolitical differences to formulate possible scenarios.

The Ectarians were advanced people that lived in their planet, Ectaris, for ages. However, a structural adjustment in the solar system threatened their very existence. To survive, they had to build a massive starship to evacuate its inhabitants. Unfortunately, only fourteen family members known as the founders were able to survive in the long run. Among the founders was Eber whose bloodline was traced to the biblical Noah and to corroborate this, there language was mutually intelligible with the Hebrew language. Considering that the world has become deeply divided across religious and ideological lines, this discovery outraged the Persian Caliphate that now controls much of the Middle East and North Africa and prompted them to target Israel for destruction, in a jihad led by Saed. This prompted the realignment of forces as world powers led by the United States recognized the Founders, leading to the formation of the Iapetus Federation.

With advancements in technology, mass space travel has finally become possible thus opening the way for humans to inhabit some other planets as anarchy was enveloping earth.

The Iapetus Federation is a classic sci-fi that is not only intriguing but will equally tickle the reader’s imagination.