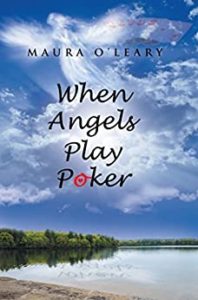 Jimmy was a sixty-four-year-old conman who lived a carefree life. However, on a day he was hoping to have fun with a lady, he suddenly collapsed and died of heart attack. Then strange things began to happen at a fast pace; unknown to Jimmy, he was dead and his soul has arrived in heaven! An encounter with Master Norman would herald amazing things that would force the reality on him.

The book is a fantasy that captured some of the biblically documented as well as imagined things that are believed to take place in heaven when people die. It is written in a funny and dramatic way that is not only captivating but equally thrilling.

Other characters in the book include Bob, Pat, Maura, and Katharine among others.

There are lots of humorous lines that will literally send any reader rolling on the floor with laughter. The simple way the book is written makes it ideal for virtually different age groups.

At 121 pages long, and with a rich plot, ‘When Angels Play Poker’ belongs to the classics one can read over and over again, and still find it enjoyable on each occasion.