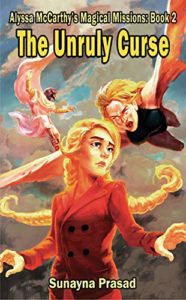 There is something refreshingly unique about this book, and I think it has more to do with the plot than anything else. Generally speaking, most fictional books or scripts that dwelt on areas such as magic, sorcery, and witchcraft are usually given a medieval or somewhat fairytale plot. However, this is where The Unruly Curse differs with most other books in its genre. The book was set in today’s world but combined contemporary lifestyle with medieval activities such witchcraft, magic and sorcery.

The main character is a  fourteen-year-old girl named Alyssa who was only orphaned a year earlier when her parents died in an auto accident, leaving her in the hands of a cruel uncle.

One thing that is apparent is that this book was written from the perspective of teenagers as their worldview is entrenched in the activities of Alyssa and her friends, therefore it will most likely be a classic to teens and the young at heart.

Aside having a rich plot and fairly well developed characters, the author did a good job in making the characters lively with detailed descriptions on scenery. Much of the events that transpired in the book occurred within school environment, the household as well as the neighborhood. Which is a pointer to the demographic segment the book largely appeals to, but that is not to say that much older people will not find the book thrilling.

Another plus for the book is its well detailed form which makes it easy for the reader to easily conjure up images and activities as they occur in the book.

BIO: Sunayna Prasad enjoys writing fantasy books for children, as well as cooking, creating artwork, watching online videos, and blogging. She has also written The Frights of Fiji, formerly titled as From Frights to Flaws. She is passionate about modern life, fantasy, and world-building. Aside from her website, sunaynaprasadbooks.com, she also has a blog about different creative and entertaining topics, including fiction and writing, called “Sunayna Prasad’s Blog”.
Sunayna has graduated from college in May 2017. She lives in Long Island, NY.