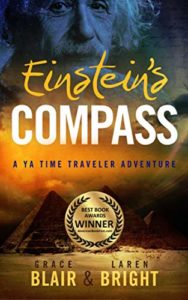 Although the book is about the life of the world famous physicist, Albert Einstein just as the title suggests. However, the plot began on a tense note as Raka embarked on his make or mar mission to the Aryan island. He may be just twenty five and handsome, but his ambition was as big as his six feet plus physique.  He wasn’t sure of the sort of reception he would get from his hosts, but he wasn’t taking chances as that too had been taken care of in his plan B. After months of feeling neglected in the hands of his elder brother and uncle, Raka felt he would rather risk it all with the sons of Belial than continue being left behind in the scheme of things back at home. The part on Raka is actually to give an insight on what happened a long time ago, how the evil that was about to befall humanity began and the role Einstein will eventually play in stopping it.

Einstein’s Compass is a mix of facts and fiction as it incorporates events that took place in Bible times as well as some notable characters in the Bible such as Moses, Ezekiel and Jesus in addition to true life activities about Einstein as well as fantasy about Raka and the evil dragon that threatened humanity. Unknown to Einstein, Raka and Countess Victoria were desperate to retrieve a powerful compass in his possession but he must find a way to stop them.

Einstein’s Compass is a unique and captivating story that will stretch the imagination of its reader to the extreme limit.