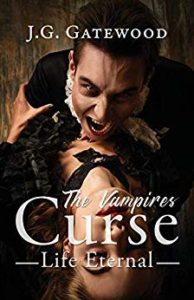 The story began in the prologue, and the first two paragraphs were enough to give the reader an idea on what the plot is all about—all thanks to the author for being as detailed as possible with very few words.

As Chris, the book’s protagonist lay on his dying bed; tired and sad that he was leaving the world with his loved ones in it, at just only 20. The reader can’t but feel the emotion and frustration the protagonist was passing through as he battled with brain tumor. In a sudden twist, a strange character came into the picture and promised Chris a second chance to live although not in the real sense as a human. The plot began to take the prospects of a thriller, the sort that is common with motion pictures.

Chris had to drink the vial Byron gave to him and was able to transmute into a vampire-like creature but one that still retained several human features.

Chris had to fight his way out of strip club in trying to escape from his adversaries but was accidentally knocked down by a lady. It turned out that the lady, Michelle, was an old school mate of his back in high school. Michelle shockingly recalls that Chris was supposed to be dead, and was on the verge of freaking out when Chris had to release some pheromones to calm her nerves.

Unwittingly, Michelle became stuck with Chris as he tried to escape from the beasts that were in hot pursuit.

Vampire’s Curse does not just have a pulsating plot, but is equally well written and laced with memorable and powerful lines that would make Hollywood script writers green with envy.

Reading the Vampire’s Curse is like watching a thriller through the pages of a book. However, granted that the book has relatively few characters considering its size, but there weren’t any dull moment all through to the end.

The story was told mostly through Chris’s perspective and partly Michelle as well.

Towards the end, Vampire’s Curse appeared more like fantasy as Chris and Michelle became intimate and he was able to get in touch with his family.

Vampire’s Curse is no doubt a thrilling book that could make any one’s day.

BIO: J.G. Gatewood lives in Parker, CO with his wife Sarah and two sons Branden and Evan. He is the author of five books and one short story. When he isn’t writing, he enjoys crafting his own beer and wine. He also indulges in a fine cigar and a nice glass of scotch from time to time.