Home > Why They Stay 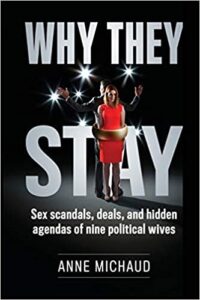 Why They Stay is a classic nonfiction book that has provided credible and reliable answer to a critical question lots of people have been asking over the ages. Why would a prominent politician cheat on their wife, only for the “victim” to not just remain in the marriage but also go the extra mile of coming out publicly to defend such philandering men?

Anne Michaud in this book obviously did a lot of research and study to unravel the mystery behind this unnatural phenomenon, and the result is as intriguing as it is amazing.

Some of the most scandalous extramarital affairs in history that affected famous politicians and their wives were x-rayed in this book as case studies. They include Hillary & Bill Clinton, Eleanor & FDR, Jackie & JFK, Huma Abedin & Anthony Weiner among others.

What role do factors like family background, upbringing, patriarchy, security, and tradition etc. play in all these?

The White Queen Syndrome and its implications on some women, and why they maintain a stance that is contrary to established norms.

The author also provided comprehensive end-notes that would help the reader to navigate more extensively through the facts that were laid bare in this book.

This is one book married couples and indeed all adults should endeavor to read!