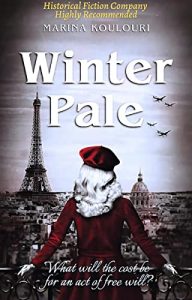 As WW11 raged, and the Germans having seized control of Paris, Winter Pale was left all alone to wander aimlessly. She was a foreigner in a hostile nation that was contending with conquerors. Having escaped the cruelty of her stepfather, she soon realized how vulnerable she was in the perilous streets of Paris. It was only a matter of time before she was confronted with man’s cruelty in its most barbaric forms.

Would Winter be able to claw her way out of the cesspit she found herself? Would she even survive the nauseating debauchery going on at Golden Doe or other perils of the war? Could she ever find happiness again?

Characters in the book include Jules, Carole, Christian, Pierre, Georgette, René, Fred, and Louis among others.

Winter Pale recounts the atrocities that were committed during WW11 in a unique but deeply touching way. One can’t read this book without deeply feeling emotional and teary.

BIO: Marina Koulouri writes Historical Fiction, featuring strong emotional histories with a moral dilemma leading characters in the discovery of a painful, yet enlightening and liberating, truth about themselves.

Born and raised in the largest port city in Greece, she has learnt to appreciate diversity and distinguish the mainly human attributes in people from different backgrounds, a powerful uniting force.

A holder of two Bachelor’s degrees in English Literature and Mass Media, and a Master’s in Conflicts in Communication, she has published a novel and a short stories collection in Greek. She also writes for screen and stage. When she is not writing, she teaches English.