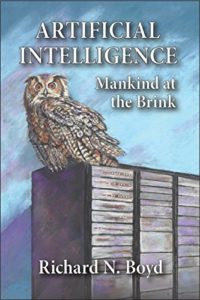 Josh alongside his partner James, were working on advanced AI robots and in the process created the first ever of such which was named ARTIS. However, what they did not envisage was that ARTIS could accelerate its own programming beyond the level of her creators.

The book is not only thrilling in a suspense and exciting way, but equally laughter inducing. Several sections/sentences actually got me ROTFL with laugher. A couple of such episode is this excerpt below

……..“It’s not my job to make you feel good. I’m not your therapist.  But our recent discussions suggest that perhaps you could use one.”……. A response by ARTIS’s to one of Josh’s questions.

….. “Josh, I’m really anxious to get some new robots. Those that are the standard for Googazon are so Twentieth Century. They definitely need to be improved. In fact, they’re quite useless, and I’m probably being overly generous. It would be a complete waste of my time to even try to work with them…..” Here’s another one.

What Josh and the Googazon Group didn’t realize was that ARTIS could evolve to the extent of threatening human existence on earth.

Artificial Intelligence, Mankind at the Brink may be a work of fiction, albeit a classic, but it encapsulates a scary possibility of what could happen in the future as scientists continue to develop their programming skills and AI advancement.