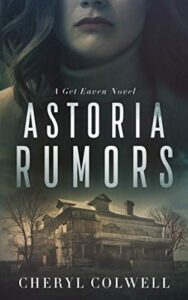 Eaven Kensington had gotten married to Michael Darlton who was eight years younger, and her father in-law couldn’t hide his disappointment at the age difference which he felt would rob him of the opportunity to have a grandchild. However, Eaven was passionate about her marriage and faith smiled at her when she took in after almost a decade of waiting, but a freak accident will nullify everything and dash her hopes of ever giving birth. It was a devastating experience but she was determined to pull through alongside her husband who she believed would always be there for her, but unknown to her, Michael has a dark secret that would ruin all they shared. Coupled with her mother who never got along with her, Eaven thought life couldn’t get any worse than it is already. As she drove south; broke, lonely, and heartbroken, she made a resolve to bounce back at all costs.

It would be hard for anyone to read Astoria Rumors without fighting the urge to cry. It is a book that was written in a way that makes the events appear so real yet highly captivating. It is a book you wouldn’t want to drop until you get to the end.

BIO: “Cheryl Colwell does a masterful job in setting the scene…I could taste the food, smell the air, and feel the tension as the story progressed.” [would love to replace this with something stronger]

Looking for a little danger? Award-winning author, Cheryl Colwell, has written multiple suspense novels appropriate for the Christian market. Her readers escape to stunning locations where they meet mysterious strangers and encounter unexpected danger. And enjoy a bit of romance.

In past lives, Cheryl has been a potter, an artist, owned a Bed and Breakfast, raised four kids and numerous cats and dogs, created a U-Pick flower farm, and was known as the “Ashland Iris Lady” for hosting an annual iris festival. Her back loves that she’s settled on writing!