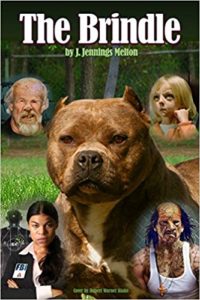 The Brindle could be described as a classic thriller with a rather unique plot that revolves around dog fighting.

The characters are well developed and they include Uncle Ron Arwood, an eccentric and cunning old man in his seventies who owns breeds of fighting dogs, a weed farm and handfuls of riffles. He has been in and out of prison for most part of his life and with no family, he considers Richard Arwood Jr., his nephew, as the only family he has and was hoping he would take over from him when he is no more, yet wouldn’t hesitate to put a bullet through his skull with a water-tight alibi to save his neck if he goes out of line. Ron could be very blunt with his words and doesn’t seem to take anything for granted. A chronic smoker, and didn’t flatter himself when he blurted out that cancer could be lurking somewhere in his body. His nephew Richard Arwood Jr. was wary of him but has learnt never to question Ron in whatever task he requests him to embark upon regardless of the risk involved or how disgusting it could be.

John Ryan is a trainer at the gymnasium and his job description entails training rookie cadets of males and females in combat but his class was notorious for the brutality that takes place within its confines and the fact that no female has ever been resilient enough to pass; a record he cherished until he encountered Dominica Verez who unknown to him was an ex marine medal of honor specialist. She was able to take him unawares in one swift moment that landed John Ryan in the hospital, momentarily unconscious.

Dominica Verez had a tortuous childhood and watched as her father was murdered in her presence by a vengeful gang. It was an episode that made her to lose her innocence and to become a combatant with exceptional skills later in life.

The Brindle is indeed a well detailed book that feels like a thrilling movie being watched on a screen!

The book has a good plot that was complimented with outstanding characters, a combination that made reading it addictive and interesting by all standards.

BIO: J. Jennings Melton was born in South Bend, the county of St. Joseph Indiana, in 1979.

He lived, as a child, in Texas, Northern Indiana and Tennessee. Raised by a drug-addicted father, he would spend many of his teen years incarcerated.
It was in juvenile and penal institutions where he developed a love for literature and a passion for writing. Upon release, the author enrolled in college while on parole in Knoxville, Tennessee.

The Brindle is the first of many works to come.