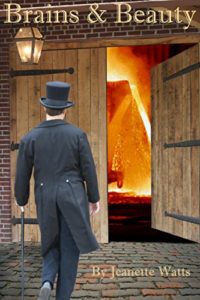 Thirty-two years old Regina Warring was the smart and beautiful wife of Henry, a rich business magnate whose business was on the verge of bankruptcy. Regina had a humble beginning while Henry came from a wealthy home. However, Regina was able to rise within a short period both academically and in the business world through the platform Henry made available for her. However, Henry couldn’t help feeling intimidated by her intelligence and ability to get things done far above his own capacity to do so.

Regina wasn’t aware how bad things were until the untimely death of Henry in an accident revealed how he had mortgaged most of their assets to collect loans he personally mismanaged, and without her knowledge, as well as an unhappy mother-in-law who was breathing down her neck—it was going to be a hell of a time.

Events in the book took place in the 19th century, and it captured the lifestyle that was obtainable during that period. At 423 pages long, Brains and Beauty is relatively voluminous and could keep one meaningfully entertained for a long while.