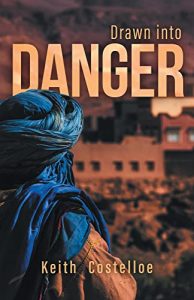 David Graham was turned down on a job in Southern England, but he decided it was time he explored the world beyond the shores of Europe. When he saw an opening to teach in Algeria, North Africa, David jumped at the offer. He thought it was going to be a great adventure to experience life at the precincts of Sahara Desert. However, the culture shock in a developing Muslim nation and an environment that was in stark contrast to what he was accustomed to back in England was something he didn’t bargain for and neither did he envisage his adventure could also culminate in a real threat to his life.

Other characters in the book include Josephine, Moussa, Seamus, Ahmed, Steve, Farid, Sue, Goma and Liz among others.

Drawn into Danger is a thrilling adventure story that was narrated in retrospect. It also revealed how things used to be years back—it’s indeed a short but enjoyable story.

BIO: Hi, I’ve lived and worked in many different countries and my first book, Drawn into Danger, set in Algeria, is a reflection of my time spent there. It is a fictional story, but the places are real. I’ve included a picture of my police ID to give you a flavour of who I was then. Time passes, and in later years, I started to reflect on what had been. Fiction gives you the freedom to explore different scenarios and allows the imagination to soar. I hope you enjoy reading it.