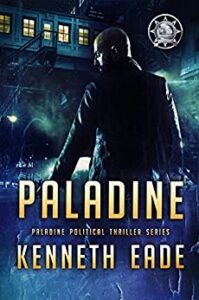 The story dwells on Robert Garcia, a five-foot eleven ex-military man turned assassin who was as ruthless as he was elusive. In trying to battle a network of terror cells that had proliferated across the United States, Robert once again had to take up a new identity as a Muslim jihadist so he can gain acceptance into the enemy fold.

After foiling the McDonalds terror attempt and killing the terrorist, Paladine unwittingly stirred a hornet’s nest as both the Muslim jihadists and ironically, the United States anti-terrorism agencies came after him. Paladine was forced to live the life of a fugitive as he continually got entangled in one risky operation after another, but it was a price he was willing to pay to help restore sanity to mankind.

Paladine is a thriller story that has as much action as some of the best Hollywood blockbuster movies. This Kenneth Eade’s masterpiece is a captivating book and anyone who is fond of John Grisham type of nonfiction will definitely fall in love with this book!