Home > From The Bottom of the Bay 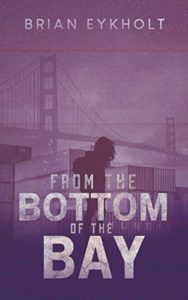 The story began on a high note as a ship approached the US coast. Aboard was a girl named Alexa, a rookie who has just been introduced into the shark infested waters of smuggling, and her companion, an old man called Wayne. Only a few months back, Alexa was a degree student at Stanford University and was on top of the world with her boyfriend Connor Higgins before things went terribly south.

The tempo of the book increased as the story progressed, taking an emotional trajectory. It became obvious that Alexa took to smuggling just to survive. She was hoping to use her pay from the last trip to offset her rent backlog but her partner, Wayne couldn’t come up with her own cut and she was forced to sleep with the owner of the ramshackle dormitory where she was putting up. Alexa became hopeless, thinking that her situation couldn’t get any worse than it is already. But she was in for a rude awakening as a gang of Mexicans ran over her rickety bike and kidnapped her.

Aside the book’s good plot and fairly developed characters, the author’s way of writing is quite funny and can elicit laughter from the reader.

On the other side of the divide is the US customs where Charlie and Sonia were working round the clock, trying to keep the docks free from illicit drugs and other contraband.  The two didn’t have much in common and while Sonia was a no nonsense lady, always on the lookout for troublemakers, Charles on the other hand was content with working at a slower pace.

Having lost two of her fingers as a result of Santiago’s brutality, along with her innocence much earlier, Alexa became more hardened and ruthless in her smuggling deals. At only 23, she teamed up with the younger James who she thought the secrets of survival in the high risk world of smuggling.

Sonia’s mission was to get hold of Alexia but all attempts kept proving abortive as Alexia was always one step ahead of her. However, Sonia remained resolute, bringing Alexia to book will not only assuage her ego but will also guarantee her much hoped for promotion.

Sonia’s sudden death in the hands of Santiago’s men threw Charlie into grief and a strong resolve to avenge her.

From The Bottom of the Bay is a thriller that would surely keep you busy.