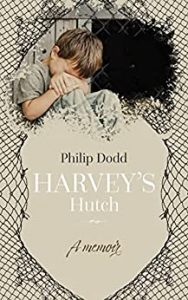 Philip was born in a small town in 1952, and growing up in England that was just recovering from the effects of WW11 created some nostalgic moments in his memory. Several decades later, Philip was able to go on a time travel using solid mirrors that appear in the air. It brought back stark realities of how life used to be during the years of innocence; his childhood friends and the experiences he had with Harvey their family pet rabbit, as well as other fond memories while growing up. All of which contrasted with the current situation of things as he moved from England to Armenia.

Harvey’s Hutch is an interesting memoir narrated by Philip Dodd. It also gave an insight about human cultural diversities as one move from one place to another.

BIO: Philip Dodd was born in 1952, lives in Liverpool, England, has a degree in English literature from Newcastle University, and is the author of five books, Angel War, Klubbe the Turkle and the Golden Star Coracle, Still the Dawn: Poems and Ballads, Last Flocks of the Geese, and Harvey’s Hutch. He has had poems published in poetry magazines, such as The Dawntreader, Nomad’s Choir. and in Mallorn, the journal of the Tolkien Society. Apart from reading and writing, he enjoys writing songs and playing his acoustic guitar.