Home > He Goes Out Weeping 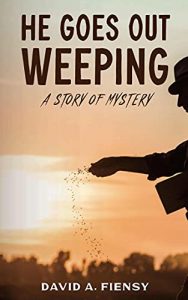 John Book was an easy-going nerd who looked frail, but underneath the façade was a man as strong as a bull and ready to take any risk, no matter how lethal it may be. Despite being a law abiding citizen, he ironically seems to attract trouble wherever he went—an unlikely character for a theology student.

Four graduate students at Graf University were working on some ancient relics when their professor was murdered in cold blood, and then another murder in quick succession. However, unravelling the motive or the killers would turn out to be a near impossible task.

One thing is certain about this book; you can’t read it without laughing so hard repeatedly. There are loads of comical lines that will literally have you rolling on the ground with laughter.

He Goes Out Weeping is a thrilling and highly entertaining book that will surely keep you engaged till you turn the last page!

BIO: David Fiensy taught religious studies in universities and churches for forty years. Now semi-retired, he is engaged in speaking for special events and writing projects. He is the author or editor of sixteen works on early Christianity, including his historical novella, As Far As You Can.