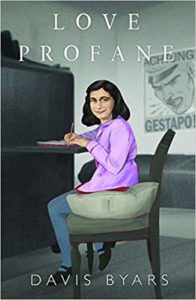 Love profane can get any random reader addicted right from the very first page. The curtain raised on a school girl named Amy as she battled with the loneliness that came upon her. The parents seemed to be too preoccupied with their own personal affairs to give more than a passing interest in Amy. All to the chagrin of Miss Metcalfe, Amy’s teacher in school who couldn’t seem to understand why Amy’s parents were so aloof about their daughter.

James Turner and Louise were having a tough time trying to balance the demands of their careers with parenting. However, it turned out that managing the home front was proving to be a huge challenge. Louise was afraid that Amy was gradually becoming rebellious.

The void their usual absence created was filled with their activity with a low budget Eastern European nanny James hired from an agency. Louise was wary of the nanny and how she might impact on her two children but she couldn’t out rightly reject the idea considering the fact that it was her absence in the first place that necessitated the need for a nanny.

Amy was rapidly growing faster than most of her mates; at just 10 she was significantly taller than the rest of her classmates and had already experienced menarche. She took a decision to be like Anne Frank by keeping a diary of all the activities that was taking place in her life.

Love Profane is a book that could be enjoyed by just anyone simply because it will resonate with both parents and children alike. It captured most of the challenges children face when parents fail to pay enough attention to their kids as well as troubles faced by parents when their wards seem to be belligerent.

BIO: Author of “Another Way to Heaven” (Vanguard Press 2011) under the author name David Bye. A historical novel set in the time of the Italian Renaissance.