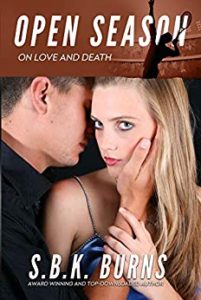 Madison had always looked up to Greg as a role model and motivator but she knew her feelings for him transcended those and was more personal than she would want to admit. Greg Gervaisie was the world’s number one tennis player until a limo accident incapacitated him and left him on the sidelines. Just like everyone else, he was struck by Madison’s beauty and her determination to rise to the top of her career as a tennis player. However, her nonchalant attitude towards him was a cause for concern to him.

Madison’s father, Armand, would do everything just to pacify his adorable daughter but her staunch disapproval against his wish of marrying Berneen Gervaisie, Greg’s mother, was something he couldn’t accept. The fact that the two women he loved most can’t stand each other bothered him.

The plot of Open Season on Love and Death is intriguing and dwells on issues that are common in most families, especially as it relates to interpersonal relationships in romance, love and marriage, thus it will be easily relatable with most readers. Likewise, the characters are also fairly developed. The background of the book hovers around tennis sports and of course, love, romance, and sex.

BIO: I’m a scientific generalist with several advance degrees. I have a history in secondary education and have accepted awards for creating programs for gifted and challenged students.

I’ve written about a dozen novel, mostly SFR (science fiction romance), but every once in a while I write contemporary to hone my skills at deepening character relationships.

To honor my father (who was big in tennis in the US), I’ve written a contemporary OPEN SEASON. It involves a little science and suspense.

I have a space opera out to beta readers that I’d like feedback on as well after i consider their remarks.