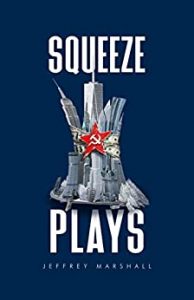 Corbin was the CEO of Whitehall Banking Group, married to a lovely wife with three kids and has virtually everything anyone could dream of. But a badly performing loan was almost putting a dent on his impeccable record. Unfortunately for him, he can’t take drastic actions against them as they were connected to the Bank chairman. Then an extramarital affair only complicates things even further.

Winston has a bloated ego to protect but the Star publishing company he was running now nears bankruptcy. Worse still, newspaper publishing was generally experiencing a glut as online media takes over the market share. However, in a desperate move to save the situation, he entered into a shady deal with a Russian billionaire. The stakes could only go higher as set-ups and blackmails were thrown into the mix. The chances of anyone getting out unscathed only gets slimmer…..

Squeeze Plays has well-developed characters with a plot that revolve around the corporate world—it’s indeed a highly entertaining story.

BIO: Jeffrey Marshall is a writer, novelist and poet from Scottsdale, AZ. He’s the author of five books, including the novels Squeeze Plays, Little Miss Sure Shot and Undetected (a ShelfUnbound Notable 100 book in 2020), and a collection of poems, River Ice. A retired journalist and the former editor of two national business magazines, Marshall has freelanced to more than 30 publications as varied as The New York Times, High Country News and Tail Fly-Fishing Magazine, and his short fiction has appeared in online magazines like Bright Flash Literary Review, Ariel Chart and Vocal.com, among others.