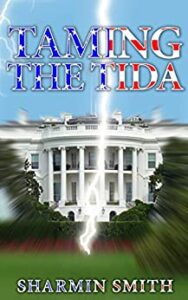 The dateline was 2044 and Amanda Thompson has had both the good, bad and ugly experiences as a professional reporter. However, when the United States President, Ms. Sharmin Smith was addressing a crowd of enthralled people in front of the White House and was struck by lightning that came from no identifiable source, it was an unprecedented horrific scene. As if the incident wasn’t bad enough already, her body couldn’t be traced afterwards.

To Amanda, this was a disaster like no other, Ms. Sharmin Smith was not just the President of the most powerful country in the world, she was equally the grandmother of her husband. It became necessary for her to dig into the archives and release a documented interview she had with the late president while hoping it would help set the records straight.

Characters in the book include Jayson, Elsa, Dean, Olivia and Kristina among others.

Taming the Tida is no doubt a thrilling fictional book, yet it feels more or less like a time travel into the future. It is a thought provoking book that can push the imaginations of the reader, especially in areas such as politics, history, religion and family life.

BIO: Sharmin “Eslynne’ Smith grew up as a Navy brat with her father retiring out of Great Lakes as a Company Commander. She has been both an enlisted and a commissioned spouse, she is now a former spouse. She spent more than a decade working for mortgage companies doing everything from default and foreclosure, to originating, underwriting and eventually repurchasing defaulted loans. As part of the spiritual but not religious community, she followed the call and shared her vision with her first book, Taming The Tida in January of 2015. Similarities to actual events were not planned or coordinated and she’s been trying to ride the wave of awakening ever since.