Home > The Bartender: Darkness on the Edge of Town 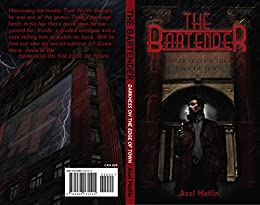 Tom  Wolfe thought he was done with living an adventurous life, and was instead trying to keep it on the low while working as a bartender in a downtown bar.  Tom was a nice guy who only smoked and drank, partly as a coping mechanism to a monotonous lifestyle. However, everything changed when he received a parcel from an anonymous sender. It contained a Smith & Wesson .38 special gun, two boxes of ammunition and a message for him to use it at his discretion while watching his back.

Wolfe knew he had to unravel the mystery behind the parcel and why they had to pick on him, however it means returning to the old but familiar risks.

The Bartender is a thrilling crime story that will hold its reader spellbound. The plot is enthralling, and the main character, Tom Wolfe, is a classic protagonist for a crime book—smart, strong, intelligent and ruthless when the occasion calls for it.

The story is told from Wolfe’s perspective and the author’s writing style is quite blunt and witty, which adds to the fun.

The Bartender is a highly enjoyable book.