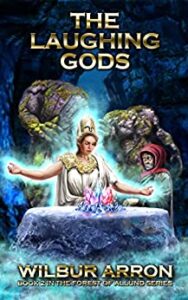 The Laughing Gods is sequel to the Forest of Allund, a series of interesting books based on the sort of activities that took place in ancient Greece. The main character remains Alexio Sopholus who has supernatural and a unique ability to communicate with wild animals. Now isolated in the forest where he was banished for breaking the mage code, Alexio was able to build a small but formidable army that included his animal friends.

The Brotherhood realized they still needed Alexio’s help for them to stand any chance of defeating the ever expanding Zilar’s conquest army. However, Alexio has his own plans just like the others, thus making a clash inevitable.

This book is fascinating to read and has no dull moments; it feels like watching a different version of Game of Thrones, albeit a more thrilling one.

Except for some typographical errors, especially on page 34 and a few others, The Laughing Gods is no doubt a masterpiece in all ramifications.