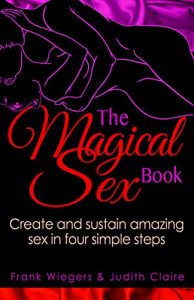 Many relationships go into a rut after the first couple of years as partners began to take things for granted, particularly their sex life. Studies have shown that this is often a precursor to other unsavory situation that may eventually lead to breakup. Therefore, the importance of this eye-opening book written by Frank Wiegers and his wife can never be overemphasized.

The Magical Sex Book is a great book that touches on every aspect of sex and love making, in an unprecedented way. One of the several lines in the book I found interesting goes thus “…anybody can have sex, but having great sex takes study, training, and practice”. Also, the book clarified that having a great love life is directly proportional to enjoying a magical sexual experience, which equally leads to increased productivity, good health and longevity.

It emphasized about 4 steps toward enjoying a deeply satisfying sex, i.e. Pre-Play, Fore-Play, The-Play and After-Play, as well as the need to maintain connection and communication for specific age brackets.

This book is relatively small at just 163 pages, yet it is all encompassing and absolutely fulfilling both from the male and female perspective—a must have for all adults!

BIO: Happily married love, sex, and relationship coaches Frank Wiegers and Judith Claire have 70 years of combined experience helping men and woman achieve the intimate fulfillment they always dreamed of. They’ve authored the award winning book, “So That’s Why They Do That! Men, Women, And Their Hormones,” and created the results-driven online dating course Seriously Seeking Soulmate.
Frank Wiegers is a fighter pilot veteran of the Vietnam War and a divorced veteran of the relationship war. When he decided he didn’t want any more wars he began to study everything he could find about love, sex, and relationship.
Frank’s desire to learn how to create connection, fulfillment and bliss with his partner led him to study with teachers from Europe, India, the US, including a Native American Shaman. Although his formal degrees are in unrelated fields (Law, Engineering, and Business) he does know how to study. He approached his study of love, sex, and relationship with the same dedication and discipline that it took to get three degrees and be a fighter pilot. He completed the Science of Mind Practi¬tioner and Ministerial Course, and the Relationship Coaching Institute Singles and Couples Coaching course. He is licensed by The Relationship Coaching Institute.
Judith Claire is a successful personal, relationship and career counselor and coach in Los Angeles. For more than four decades she has specialized in counseling members of the film industry, creative thinkers and professionals with spiritual values because those reflect her own paths and passions. Judith’s spiritual studies and practices integrate both Eastern and Western teachings and techniques, and include Tantric yoga, a form of sacred sex. Her lifelong purpose is to assist individuals and couples to achieve their full potential