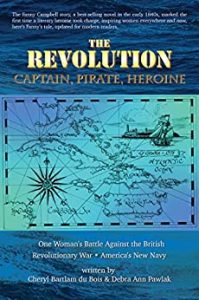 Fanny felt disgusted that she wasn’t allowed to engage in certain activities because she was a female. Unfortunately for her, she was born in the 16th century America, an era when females were subdued and designated to manage the home front while their male counterpart were free to rule their world. Despite her beauty and feminine physique, Fanny would rather get involved in demanding adventures than showcase her beauty for men to admire.

However, it was also a period of unrest as the American colonists became increasingly belligerent against the English that ruled over them. It was equally an era of sea bandits and pirates, and William, her betrothed happens to be a sailor. A sorcerer had told Fanny she is the one that would save William at a time that is yet to come. Would the prophecy be actualized?

Other characters include Henry, Moll, Agnes, Sarah, Captain Burnett, Jack, and Samuel among others.

The Revolution is a thrilling story that captured the politics and culture, as well as the uprisings that occurred during that turbulent period in America.

BIO: Debra Ann Pawlak has been a movie lover ever since she can remember and likes the fact that she shares a birthday with film great, Carole Lombard. She writes from southeastern Michigan where she lives with her husband, Michael. She has authored a book about her hometown, Farmington, for Arcadia Publishing’s Making of America Series, as well as a children’s book detailing the life of the legendary Bruce Lee. In addition, she completed an in-depth profile of March King John Philip Sousa, which was recorded and released on a children’s CD by Allegro Music. Her work has also appeared in several publications such as Chicken Soup for the Soul, The Writer, Aviation History and Michigan History Magazine.