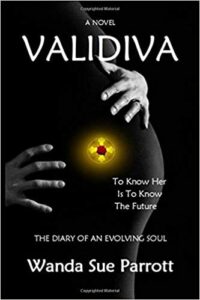 This book is a work of fiction and its dateline is futuristic. Validiva was born blind in the new calendar year known as 75 I.T. A nuclear accident that occurred in China had destroyed the world as was previously known, leaving behind some islands. It was now the age when mutants, hybrid men, and amalgamated men roam freely alongside few of the natural humans that survived the accident.

The story is told through the voice of Validiva as she narrates events that were occurring in her hometown, Cold Spring, as it relates with other places under The World Tribunal. Life has become a lot more complicated and it would prove a tough time for Validiva as she tries to reconcile with the place of Josephus in her life and a pregnancy, as well as the expectations of her parents.

Validiva is a thrilling and enjoyable book that has a unique plot that would push the borders of your imagination.

BIO: Wanda Sue Parrot is best know as a poet and poetry judge. Her Editing background is impressive, gong all the way back to being the the Food Editor for the old Los Angeles Herald, She has writeen a number of books on civil issues, including HOW TO BE YOUR OWN LAWYER.