Home > Against All Fierce Hostility 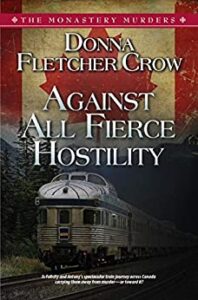 The story began as Felicity Sherwood was about to be ordained in the Anglican Communion as a minister of God. A role she knew came with a lot of responsibilities, but in her trepidation, the assurance of her family was all the courage she needed. Following her ordination, Felicity and her husband, Anthony, prepared to depart for Canada and were given the task of translating an old manuscript. Then strange and scary things began to happen around her in quick succession—murders, attacks, and a strange monastery in the background.

Other characters in the book include Cynthia, Andrew, Jeff, Charlie, Judy, and Gwendolyn among others.

Against All Fierce Hostility is a mystery book about love, passion and perseverance by a couple who were determined to triumph against all odds. The author equally did a lot of research about some interesting historical events that occurred in the Church as well as in Canada and England, the two places where most of the activities in the book took place.

This is a thrilling story that would certainly keep the reader engrossed yet with no hint of how it will end.

BIO: Donna Fletcher Crow, Novelist of British History, is a former English teacher, a lifelong Anglophile, and a native Idahoan who lives not far from the Canadian border. She is the author of 50 books, mostly novels of British history, including the award-winning Glastonbury, and three mystery series. Donna and her husband of 57 years have 4 adult children and 15 grandchildren—6 of them living in Canada.