Home > Dragons in the Clouds 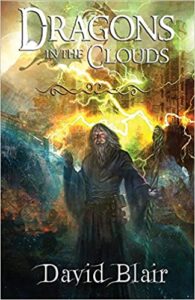 The book is about a gripping story that was told by Mr. Ray Evans to his lovely daughter Reilly, when he returned from an overseas trip.

Way back in time, in the land of Albion, two types of dragons existed side-by-side; one set were the deadly meat-eaters while others were the friendly and harmless plant eaters.

Sir Jonathan, who was the King’s royal knight, was mauled to death by a meat eating dragon during one of their hunting expeditions. In response to that unfortunate incident, King Arturus ordered that all the dragons should be wiped out.

Merlinius, the wizard of Albion was outraged by the mass killing of dragons as ordered by the king. In a last ditch effort to save the remaining dragons, he reached a pact with a dragon family with the aim of keeping them out of harm’s way.

Other characters in the book include David, Sir Solomon, Sir Manfred, Dagger, Deetha, Rago, Odious, Zindetha, and Deman among others.

Sir Jonathan’s widow, Jaysha was distraught about her husband’s sudden death and she threw caution to the wind in challenging the authorities over the terrible happenings in the land.

Dragons in the Clouds is a thrilling fantasy book that will entertain its readers till the last page!