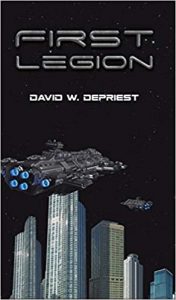 When the Gargans, an alien race from outer space were threatened by the Telinites, a warrior alien race hell-bent on conquering the entire universe, they were forced to seek alliance with humans (or so it seemed) to stand a better chance of surviving the onslaught of a perilous intergalactic war. However, unknown to humans, the Gargans had plans of their own and would use all manner of manipulations and trickery to achieve it at the detriment of all others, including aliens and humans.

Fleet Admiral Stephen James Godford knew the task ahead of him was daunting but the responsibility to lead the forces has been entrusted on him. He must everything within his power to save the universe.

Other characters in the book include Carol, Johansson, Captain Merrick, Gak, Sergeant Gillard, Lieutenant Maier, Khal, Bishop, Captain Etreech and Mitchel among others.

Although First Legion is a science fiction, it feels natural and believable like a possible futuristic occurrence the human race might experience someday. In addition, the book was written like some sort of diary whereby the protagonist kept writing down his activities.

First Legion is an interesting sci-fi that is enjoyable anytime and any day!

BIO: Born in San Jose, California, David entered the United States Navy at the age of 19. He was soon transfered to the US Submarine base in Groton Connecticut where he spent the remainder of his naval career. He began writing at the age of 55 having his first book published by Austin Macauley Publishers in August of 2020. He has since written a number of books in the First Legion series that will be published in the near future.