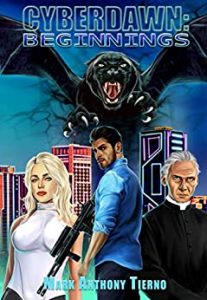 Robert “Black Jack” Hannigan was a strong-willed Los Angeles cop who can go to any extent to solve crime, even if it means using brute force. He has a reputation that goes before him, until a priest and long-time friend was viciously murdered in mysterious circumstances right in his presence. All available evidence proves beyond reasonable doubt that Black Jack was the culprit. However, he knew he was innocent but until he is able to prove that, he will remain a fugitive on the run.

Cyberdawn captured events that occurred in a futuristic timeline; during a period of self-driven cars, humanoids, mainstream church facing extinction, and demonic creatures etc. The world having changed so much from what it used to be in virtually all facets of life.

At 746-page long, Cyberdawn:Beginnings is quite a voluminous book, but to its credit, there were no fluff instead it’s fast paced and highly entertaining. This is a thrilling book that will keep you on the edge as you turn its seemingly endless pages!

BIO: A full-time author and ghostwriter, Southern California native Mark Anthony Tierno has written over 30 of his own novels, including the 13-book Maldene series and the 5-book Cyberdawn series. He holds a Master’s Degree in Physics, which often plays well in his creation of other worlds. He is a master of creating alien and fantastical worlds, such as that of the Cyberdawn series as well as both his Maldene and Inspector Flaatphut series. He has this one problem with writing, though: he can’t stop!